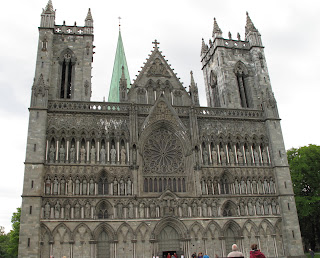 The foundation for this cathedral was first laid in 1248. A major fire
happened in 1531 and many renovations took place after this. The new
west front was designed in 1907 by Olaf Norddhagen.   This design had
the new rose window and tiers of statues.76 statues are on this front.
St Olav is 4th from the left on the middle tier. 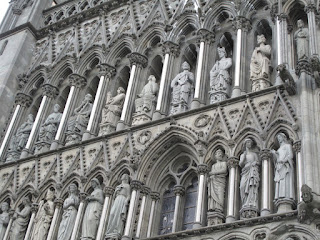 You can tell him by the axe, third from left bottom in this picture.
You will see why I am fixated on the broad axe later. 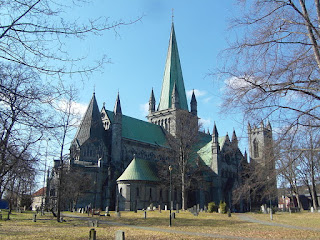 I did not take this picture (hint: blue sky!) I just want everyone to see this
magnificent cathedral from the big picture. 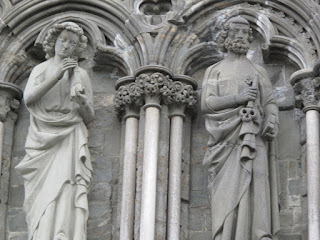 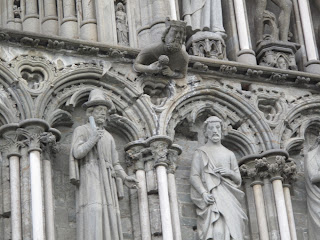 When I walked around behind the alter, I could see immense beams
all charred and blackened (might be from 1248) with a very shiny patina
from the length of time they have been there after a fire. I got goose bumps
thinking of all the history and Saint Olav's tomb there. We just don't appreciate
the age of things like this here.

2nd Century. By forming all the Christian parishes throughout the land
Norway was more a united nation. He was killed in 1030 at the battle
of Stiklestad 29 July. He was buried somewhere around the high alter
of the place where the Nidaros Cathedral now stands. When they moved
his coffin to the present spot in 1031 reportedly his body lay unblemished.
He was subsequently beatified and is now the patron Saint
of Norway. He was killed with 3 wounds, one from a battle ax.
Now the Shield of Norway has his ax, the crown and Lion 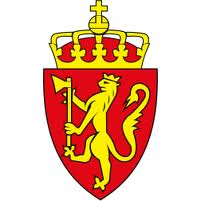 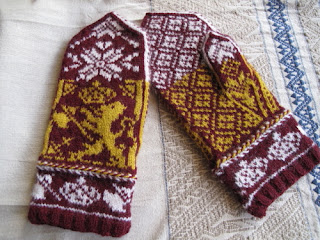 Here are my Shield of Norway Mittens made to celebrate the
200th anniversary of the Norwegian Constitution.  Pattern now available
at Norsk Needlework  and Ravelry.   *Norsk oversettelsen inkludert* 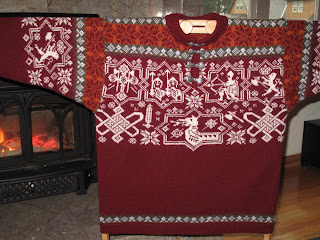 So, way back a year ago, I looked at the spoon and got the idea of a Story
of Olav sweater. I started researching him and found the history intriguing.
The further I got, I found so many related pictures and motifs.
I will be the first to admit the pullover is "busy"! But oh
so fun to knit. I haven't decided whether to make up the pattern yet.
It depends on if anyone is interested. Please let me know!!!
Well after I had the pattern graphed and started, I found out I could go
to Norway and was thrilled to see the fantastically beautiful cathedral.
The book above tells the story of all the statues and pretty much all
about the Cathedral.    Visit Trondheim
I put this link here. I shared it on Facebook and they send me the most
fabulous pictures almost every day. It makes me want to return to Trondheim
so much!!!!! I just loved it there. 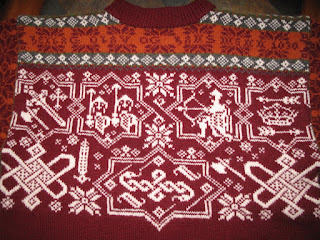 My son picked out all the colors and helped with the motifs and ideas. We
shared a fun time getting it all planned. He is anxious to wear it skiing at Tahoe
(practically in his yard) 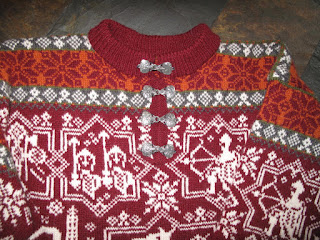 Stitching at the Beach

This is becoming an annual event. 26 ladies for a 4 day stitching retreat.
Much good companionship and the best weather this weekend ever!
I took many more pictures outside from our walks on the beach. There
were 2 ways to get to the beach from our rented house. Up the stairs
and down the 130 stairs, or all the way down and around the hill.
I went on long walks every day and feel great! 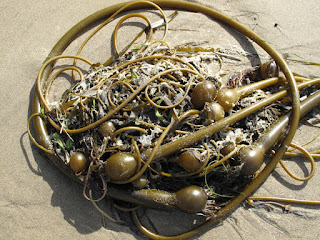 Great fun was had by all. Terrific food from Vicki, who organized the retreat,and Donna!
Wonderful setting for a getaway!!!
Posted by Unknown at 1:26 PM 0 comments

This year was super fun. The weather was sunny and warm.
Delightful under the trees. There were, I think, 250 vendors
and I did well to support the local economy. In a new sock
book I purchased the author said you can't throw a skein
of yarn without hitting a new hand dyer of artistic sock yarn
in the Portland area! Many were represented and the
selection of hand dyed rovings, yarn, beautiful combinations
of a variety of wool, alpaca, mohair and angora.Enough to
delight the finicky spinner or knitter. I went thinking I wouldn't
need to purchase anything (I have quite a stash already) but
I broke down.


This is where I got my lovely striped rolags. 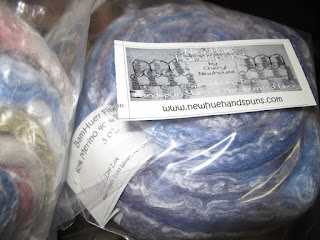 There were quite a few ladies demonstrating bobbin lace. 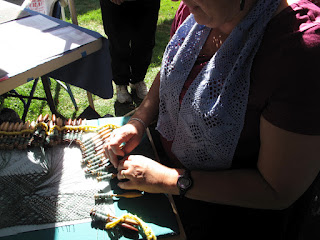 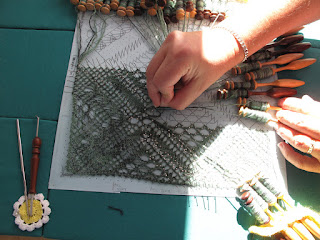 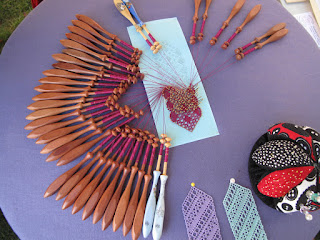 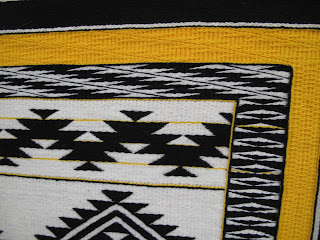 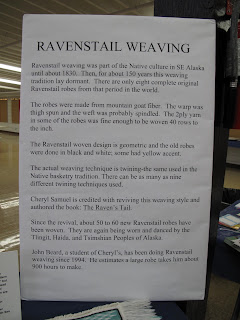 John Beard had a fabulous showing of his Ravenstail weavings.
My daughter and grandson were mesmerized. The weaving is so
intricate and best appreciated by mathematical minds like theirs
.                It was just facinating. I have much more appreciation for
Pacific Northwes Native art. It is interesting that the colors to
accent were yellow and a beautiful pale turquoise. (no red) 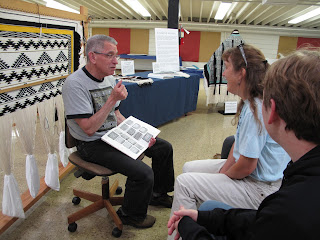 No fiber show is finished without a trip to the barns and visiting
the animals. 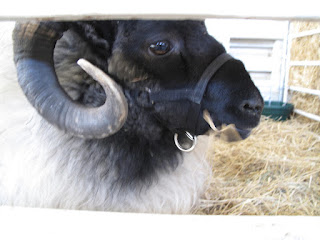 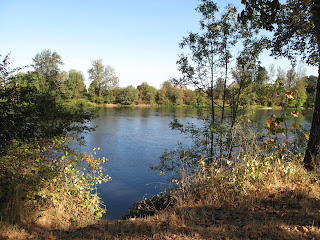 We ended up the day with a lovely trip home and ate a really nice
dinner outside at the Terminus on the Willamette River in Corvallis.
Then home very happy. Wonderful weekend 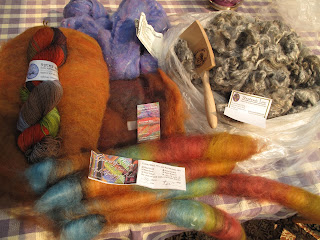 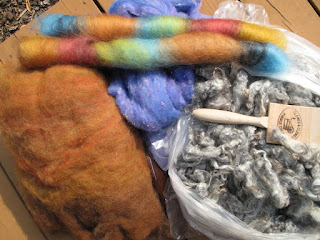 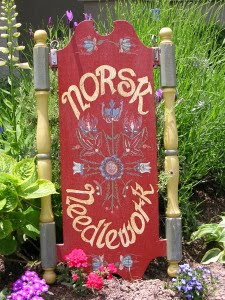